Not Your Typical Scleritis

What ODs should know about granulomatosis with polyangiitis.

Granulomatosis with polyangiitis (GPA), previously known as Wegener granulomatosis, is a rare and potentially lethal autoimmune disorder. Ocular involvement can occur in up to half of patients with GPA.1 This article details some of the ocular signs and symptoms, tests, and treatments for GPA that ODs should be aware of as the primary eye care providers for their patients.

As its name implies, GPA is characterized by a necrotizing granulomatous vasculitis of small and medium-sized blood vessels throughout the body. This inflammation often occurs in the upper and lower respiratory tracts, leading to frequent episodes of sinusitis, epistaxis (bloody noses), difficulty breathing, and hemoptysis (coughing up blood). Renal involvement, in the form of necrotizing glomerulonephritis, is also common. In its early stages it may be asymptomatic; however, as renal inflammation progresses it can cause proteinuria and hematuria (protein and blood in urine) and can result in renal failure.

Orbital inflammation is one of the most common ocular manifestations of GPA, and it may present as proptosis, diplopia, and/or pain. Epiphora secondary to nasal lacrimal duct obstruction has also been reported. Conversely, dacryoadenitis (lacrimal gland inflammation) in GPA can result in severe keratoconjunctivitis sicca.

Scleritis can often be the initial clinical manifestation of GPA.1 Patients may complain of a deep, severe, recalcitrant pain that can radiate to the forehead and jaw. The mortality rate associated with GPA approaches 80% in untreated patients.2 Therefore, it is vital that optometrists consider GPA as an etiology in any cases of scleritis that they may encounter.

GPA-associated anterior scleritis can present as either diffuse, nodular, or necrotizing inflammation. Inflammation from the sclera can occasionally spread to adjacent ocular structures, leading to glaucoma, uveitis, and peripheral keratitis. The presence of necrotizing scleritis or peripheral ulcerative keratitis (PUK) should raise concern for a primary or secondary systemic vasculitis such as rheumatoid arthritis or GPA.

TESTING FOR GPA AND THE ANCA FAMILY TREE

Three entities—GPA, microscopic polyangiitis, and Churg-Strauss syndrome—make up a group of related systemic vasculitides caused by antineutrophilic cytoplasmic autoantibodies (ANCA) directed against specific antigens in neutrophils that cause an autoimmune vasculitis. The two main types of ANCA were first characterized by their immunofluorescence patterns: c-ANCA, which targets a protein in the cytoplasm of neutrophils called proteinase-3 (PR3), and p-ANCA, which targets a protein in the perinuclear region of neutrophils called myeloperoxidase (MPO).3 This is important to keep in mind when ordering ANCA laboratory testing, as interpretation of immunofluorescence assay staining patterns can vary. Hence, a comprehensive ANCA panel also encompasses titers for PR3 and MPO antibodies. ANCA panel testing is recognized to be highly sensitive and specific for GPA and can correlate with disease activity. Up to 90% of GPA patients have PR3 antibodies.4 Definitive diagnosis requires consultation with the appropriate medical specialist depending on the organ system affected and may require biopsy (see Case No. 1 and Case No. 2).

Referral to rheumatology and nephrology for suspected ANCA vasculitis was initiated. The patient’s nodular scleritis improved with prednisone and methotrexate therapy and topical ophthalmic corticosteroids. Three months after her initial visit, the patient showed complete resolution of her scleritis with a remaining area of scleral translucency (Figure 1C). This feature is best visualized outside the slit lamp with external lighting and can be present in patients with chronic or resolved scleritis.

Figure 1. Note the anterior displacement of the slit-lamp beam, indicating a firm underlying nodule of scleral edema (A). Evidence of old chronic peripheral keratitis without active ulceration was also noted (B). The area of scleral translucency is indicated by the blueish-grey hue of the underlying choroid (C).

A 70-year-old White woman presented with a 6-month history of a unilateral red eye that had been treated unsuccessfully by multiple eye care providers. Her examination revealed a crescent-shaped peripheral ulcer along the limbus (Figure 2A) associated with deep scleral inflammation. This finding is consistent with scleritis and PUK, raising suspicion for a systemic vasculitis.

Laboratory testing revealed elevated c-ANCA and PR3 antibodies. The patient was referred to rheumatology for a probable diagnosis of GPA. Initial response with prednisone and methotrexate resulted in decreased inflammation and corneal epithelialization; however, the patient regressed during prednisone taper. Increasing corneal neovascularization and keratitis with increasing scleral inflammation (Figure 2B) and focal stromal necrosis (Figure 2C) were observed.

Working with rheumatology, the patient was started on rituximab, and she responded favorably. Despite this more aggressive therapy and resolution of her scleritis and PUK, the patient eventually developed a small perforation at the site of the focal stromal melt, requiring a conjunctival patch graft (Figure 2D). 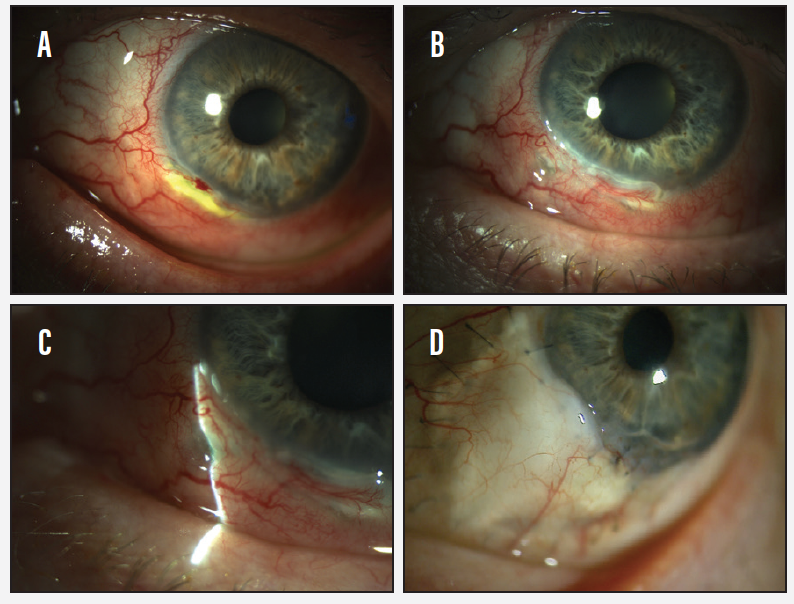 Figure 2. Examination revealed a crescent-shaped peripheral ulcer along the patient’s limbus (A). Corneal neovascularization and keratitis were noted with increasing scleral inflammation (B) and focal stromal necrosis (C). A conjunctival patch graft of the small perforation can be seen near the focal stromal melt (D).

TREATMENT OF PATIENTS WITH GPA

Although it is possible that ocular involvement may occur in isolation, it is far more likely for it to occur in the context of a more widely spread multiorgan vasculitis. Successful treatment of GPA-related ocular disease is usually predicated on early identification and response to systemic therapy, although local therapy can be of some benefit. Mild to moderate scleral inflammation may respond well to topical corticosteroids or subconjunctival triamcinolone injections.5 However, local steroids should not be used in the management of necrotizing scleritis or PUK, as they may cause further ocular tissue necrosis. Severe vision-threatening conditions such as GPA require aggressive systemic immunosuppression with high-dose corticosteroids and immunomodulatory agents.

As with other types of vasculitic disease, the development of therapeutic monoclonal antibodies has greatly increased the prognosis and survival rates of patients with GPA. In particular, rituximab, a monoclonal antibody directed against specific B-cells, is FDA-approved for the treatment of GPA in patients as young as 2 years. Administered as an infusion, rituximab has been shown to be highly successful in achieving steroid-sparing remission in patients with scleritis and PUK associated with GPA.6,7 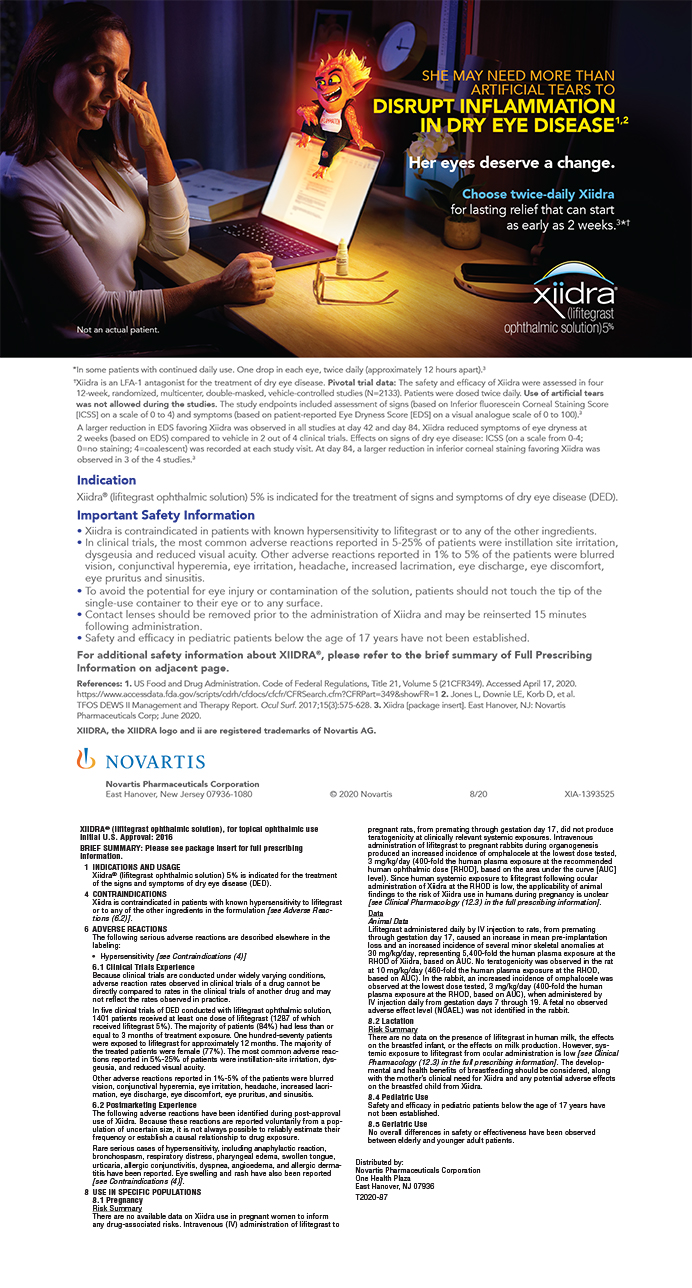 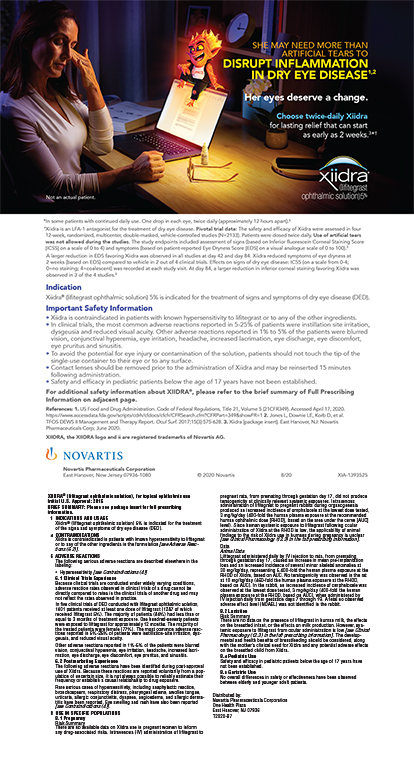 Next In This issue
Next: Dry Eye and the Contact Lens Wearer