Insights into recognizing and managing these infections.

A 49-year-old-woman presented to the Bascom Palmer Eye Institute Emergency Department with complaints of a nonhealing corneal ulcer in her left eye (OS) over the past month. She had a history of contact lens use and had been referred from an outside physician who had treated her with polyhexamethylene biguanide twice daily after trials of antibiotics (fortified tobramycin and vancomycin) and an antifungal (amphotericin) had been ineffective. A previous culture had exhibited diphtheroid growth and no sensitivities.

Upon examination of the patient’s left eye, a deep infiltrate with a fluffy appearance, a small overlying corneal epithelial defect, 1 mm hypopyon, and what appeared to be superior satellite lesions were noted (Figure 1). Her entering visual acuity was light perception OS and 20/20 in her right eye. The plan at this visit was to institute a 1-week cessation from treatment, with the exception of atropine, and have the patient return to the hospital for a corneal biopsy. This would allow for better likelihood of bacterial growth with her upcoming biopsy. 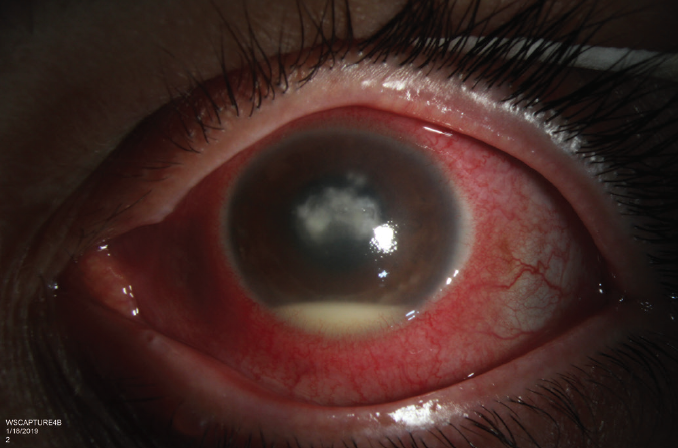 At the follow-up visit, the patient’s visual acuity OS was hand motion, and IOP was 22 mm Hg OS. A corneal biopsy was performed to obtain a deeper sample. Slit-lamp examination showed worsening of the central infiltrate and a larger hypopyon (Figure 2). The patient was started on natamycin (Natacyn, Novartis) every hour and fluconazole 200 mg (Diflucan, Pfizer) twice daily. 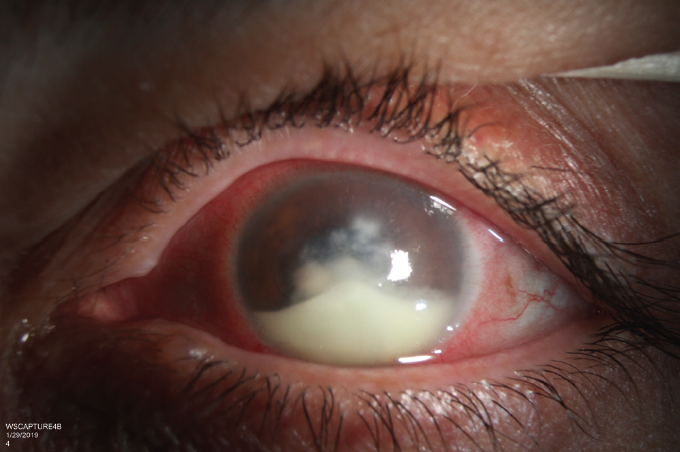 Figure 2. After discontinuing antibacterial treatment to prepare for corneal biopsy, the patient presented with worsening of the central infiltrate and a larger hypopyon.

Shortly after this visit, the biopsy results showed growth of Mycobacterium and was negative to fungus. Her treatment was then changed to amikacin every 2 hours, clarithromycin 500 mg twice daily and polymycin four times daily. The natamycin was discontinued, and the patient was advised to continue the course of fluconazole until finished.

The patient’s condition continued to improve over the next 8 months, and her medications were slowly reduced and discontinued when appropriate (Figure 3). Once the hypopyon cleared and the courses of amikacin and clarithromycin were completed, she was started on fluorometholone (FML, Allergan) with a slow taper over a 3-month period while the polymycin was continued. This left the patient with a superficial central scar and visual acuity of 20/400 OS (Figure 4). 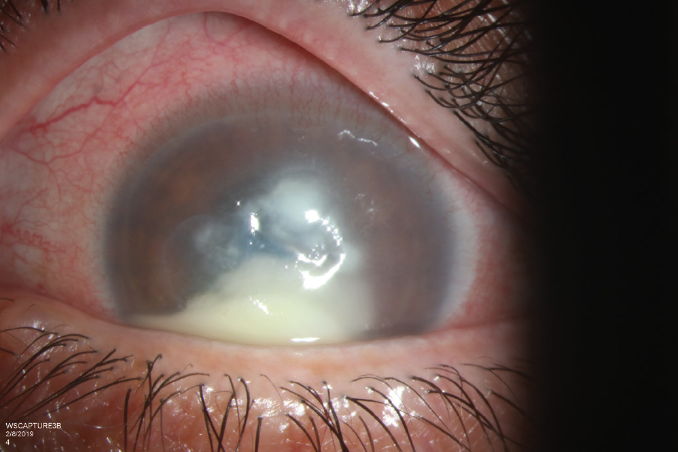 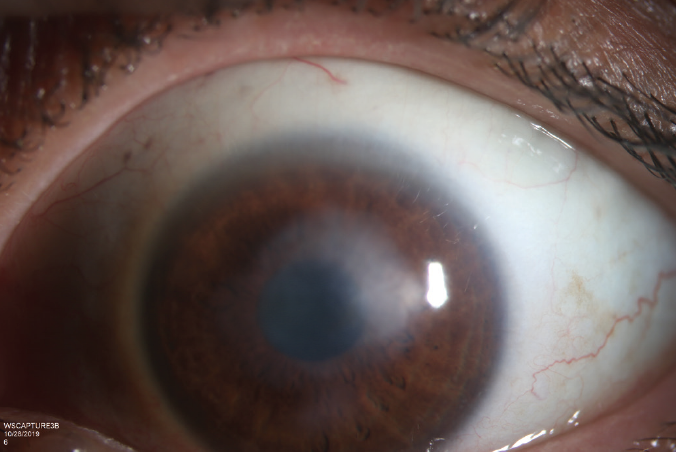 Figure 4. Once the infection was resolved, the patient was left with a central stromal scar impairing her vision to 20/400 OS.

Most recently, the patient was fit with a Zenlens scleral lens (Bausch + Lomb) with a toric peripheral curve. She was instructed to instill a drop of autologous serum tears into the bowl of the lens prior to insertion to assist in scar reduction. Her visual acuity with the scleral lens is 20/30 OS, which she says has significantly improved her quality of life (Figure 5). 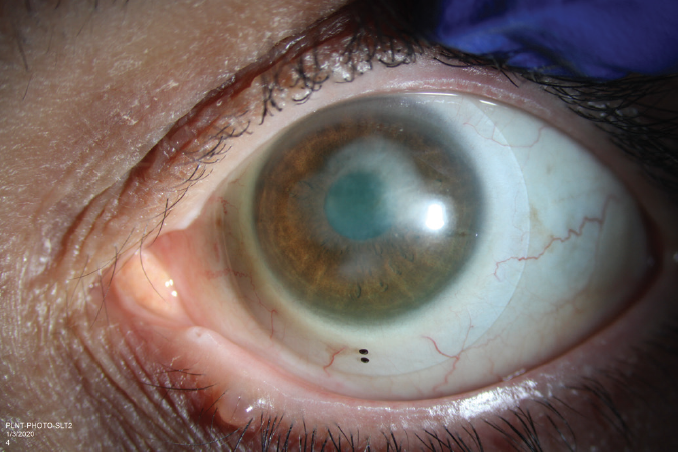 THE SKINNY ON MYCOBACTERIAL INFECTIONS

Nontuberculous mycobacteria are found everywhere in the environment—in soil, dust, and water—and they are known to cause periocular, adnexal, ocular surface, and intraocular infections.2 These infections can potentially lead to detrimental outcomes and are in many cases due to a delay in diagnosis. Nontuberculous mycobacterial infections are also encountered after trauma, foreign bodies, implants, and contact lens wear.2

Upon examination, clinicians typically note a “cracked windshield” appearance of the cornea around the edge of the central area of the infiltrate. Associated infiltrates may have irregular margins or satellite lesions, often misdiagnosed as fungal keratitis. In circumstances in which a corneal ulcer has an atypical appearance and is not responding to conventional treatment, it is imperative to culture early in order to prevent irreversible damage.

Appropriate diagnosis and proper treatment of these infections are of the utmost importance. This infection is commonly refractory to multiple medical and surgical interventions. Mycobacterial infections are typically treated with a combination of macrolides, fluoroquinolones, and amikacin, or amikacin alone.

BE ON THE LOOKOUT FOR CLUES

Because mycobacterial infections are associated with potentially damaging outcomes, one should have a high index of suspicion when faced with a case that demonstrates little to no response to medical therapy. Treatment should be based on culture sensitivities, and surgery may be required to help control the infection.

Next In This issue
Next: Industry Spotlight On Thomas Swinnen