A Noninvasive Alternative to Cataract Surgery?

Investigators are exploring chemical compounds to restore transparency to the crystalline lens.

Surgery is an effective but costly means of managing cataracts, and, like all surgical interventions, it carries risks. Moreover, a substantial number of people worldwide, particularly in developing countries, lack access to cataract surgery. The World Health Organization estimates that 65.2 million people globally are blind or visually impaired from cataracts.1 The development of an eye drop that restores transparency and flexibility to the crystalline lens would therefore be a game-changer as a less expensive, noninvasive option for treating a leading cause of blindness.

The crystalline lens is composed of epithelial and fiber cells. One of the major lens proteins in the fiber cells is alpha-crystallin, a chaperone protein thought to maintain homeostasis of the crystalline lens, thereby preserving its transparency and flexibility. As a person ages, alpha-crystallin proteins become prone to misfolding, causing them to clump together and form insoluble high-molecular-weight protein aggregates, which can lead to cataract formation.

Compound 29 (full name, 5-cholesten-3beta,25-diol), also known as VP1-001 (ViewPoint Therapeutics) and as 25-hydroxy-cholesterol, is an oxysterol, a derivative of cholesterol. Usha Andley, PhD, FARVO, is an investigator conducting research on this chemical compound’s use as a treatment for cataracts.2,3 Another oxysterol being investigated for this purpose is lanosterol. In a recent study, neither oxysterol was effective at reducing opacities of in vitro cultured lenses treated with various reagents to induce opacification in vitro.4 In an interview with BMC Vision, however, Dr. Andley stated that VP1-001 appears to be more effective than lanosterol at reducing lens opacity. VP1-001 differs from lanosterol in terms of solubility, she said, allowing VP1-001 to penetrate the eye better.

The goal of the research being conducted by Dr. Andley and her colleagues, she said, is twofold:

No. 1: To ensure that the compound is not toxic to the cornea; and

No. 2: To show that the compound is capable of reducing the tendency of alpha-crystallins to aggregate and perhaps reverse their aggregation.

In proof-of-concept studies, VP1-001 was incorporated into an eye drop formulation of 8% cyclodextrin. Dr. Andley and colleagues administered the drops three times per week in a mouse model for 2 to 4 weeks. According to Dr. Andley, the compound seemed to increase the stability of the alpha-crystallin protein so that it increased the soluble fraction of proteins from mouse and human lens cataracts. The compound also increased the solubility of two other lens crystallins, beta- and gamma-crystallin, in the mouse lens, and it seemed to reduce the abundance of high-molecular-weight aggregates in the lens.2,3

ViewPoint Therapeutics is currently developing this technology for use in humans. According to Dr. Andley, who is working with the company, ViewPoint Therapeutics is using different model systems for in vitro and protein-binding studies in an attempt to improve on earlier results with the chemical compound. Their research has identified new compounds, nonsterol ligands for alpha-crystallin, that exhibited in vitro activity and efficacy similar to or better than those of VP1-001 in mouse models of cataracts.5 The discovery of these nonsterols supports the hypothesis that pharmacologic chaperones targeting alpha-crystallin can prevent or reverse cataracts, Dr. Andley said.

In studies to date, Dr. Andley and her colleagues have treated mice in one eye with the VP1-001 formulation, and the contralateral untreated eyes have served as controls. They then compared the two eyes after the conclusion of treatment (Figure). She is looking forward to conducting masked and randomized studies that include baseline measurements of lens opacity. According to Dr. Andley, this research will begin this year. Animal testing, however, can advance understanding only so far. Human testing of safety and efficacy will be a major step forward in the research on VP1-001 and newer variants. 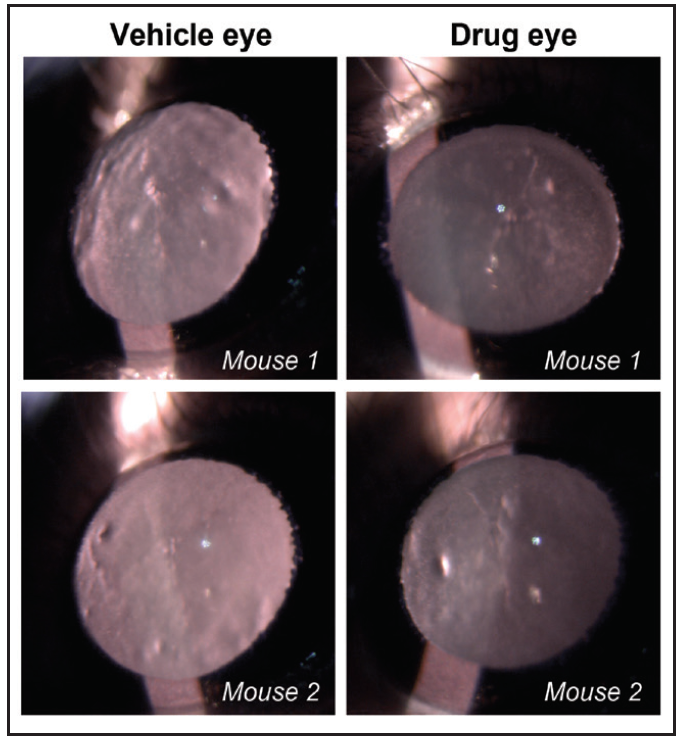 Figure. Representative slit-lamp images from aged wild-type mouse lenses show the extent of opacity treated with vehicle (left) or drug (right). Mice were treated topically with the drug in one eye and vehicle in the contralateral eye three times per week for 2 weeks. Slit-lamp examinations were performed on conscious, live mice. Mouse 1 and 2 were treated with VP1-001.
(Courtesy of Usha Andley, PhD, FARVO)

A major challenge in the development of a pharmacologic treatment for cataract is how to determine if a chemical compound can be maintained in the lens at a sufficient concentration and for an adequate duration to achieve the desired outcome. A second challenge relates to detecting change. Dr. Andley and her colleagues are seeking a more quantitative method by which to assess the extent of lenticular opacity before and after treatment. They have a modified Lens Opacities Classification System, she said, but it is less objective than methods such as Scheimpflug photography. A goal, then, is to develop a more standardized, objective way of measuring results.

Dr. Andley suggested that a topical agent could also be advantageous for the treatment of congenital cataracts that form because of a mutation in alpha A crystallin or alpha B crystallin. Retaining the crystalline lens instead of extracting it would allow pediatric eyes to develop normally, she noted.

The idea of an eye drop formulation to treat cataracts may seem like science fiction, but Dr. Andley expects it to become a more realistic possibility within the next few years. The utility of such a chemical compound could extend beyond cataracts to the treatment of presbyopia. The hypothesis, she said, is that softening the crystalline lens would improve accommodative amplitude. 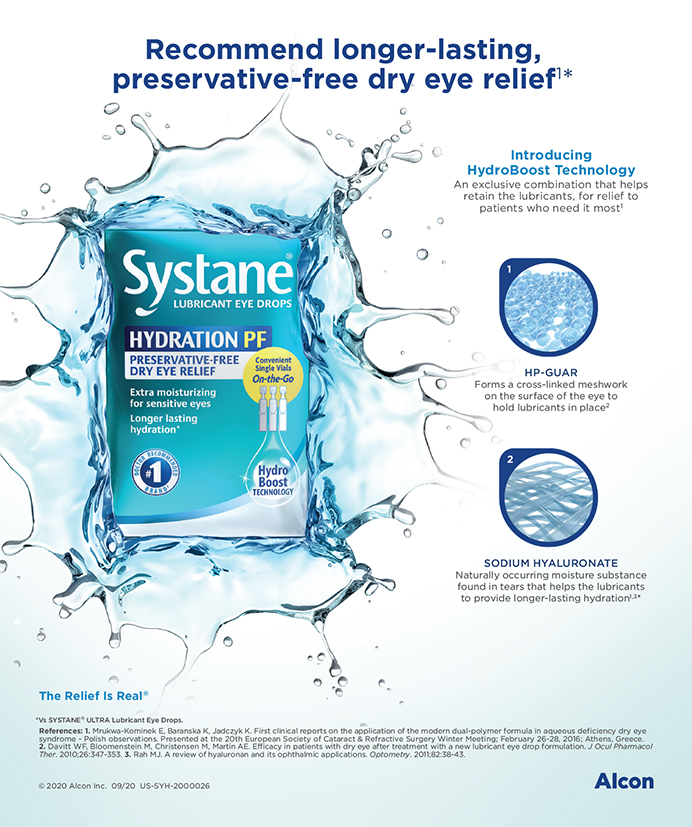 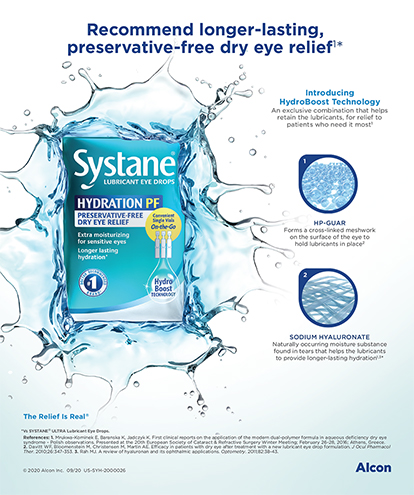 Next In This issue
Next: Cancer Treatment and the Eyes