Microbial Corneal Ulcers A to Z

A guide to diagnosing and treating these sight-threatening infections.

Extrapolating these numbers with published data on indications for corneal transplants suggests that around 5% of these ulcers go on to require a therapeutic corneal transplant—that is, a keratoplasty to help control the infection—while a significantly higher percentage require keratoplasty or keratectomy to eliminate a resultant scar.3 Even worse, of the eyes that go on to be seen at a tertiary care facility, 1% to 2% require enucleation or evisceration.4

Thus, outcomes requiring surgery are not rare, and really terrible outcomes are periodically encountered. Given these facts, and the stress and liability that comes with managing such eyes, it is crucial that eye care providers managing ulcers do so thoughtfully and respond decisively to any change in an ulcer’s behavior that is not consistent with improvement.

Although a number of considerations go into the management of ulcers, the diagnostic and treatment decisions that have the most effect on outcomes are made at presentation. This article briefly outlines the mindset necessary for managing most corneal ulcers that may present to your clinic.

Talking about microbial corneal ulcers as if their diagnosis is apparent on presentation is misleading. Although it’s true that later stage microbial ulcers are difficult to misdiagnose, early stage disease can be difficult to differentiate from all manner of corneal infiltrative processes, ulcerative processes, edema, and even corneal deposits. Therefore, it is critical that eye care providers understand how to differentiate among these conditions.

Corneal microbial processes are almost always ulcerated regardless of stage, with an epithelial defect that is at least the size of the infiltrate. This is present at all stages in most microbial keratitis. Any source of profound anterior stromal inflammation will cause local epithelial melt overlying the lesion, and, as long as the stromal inflammation persists at sufficient levels, the epithelium will be unable to heal back over the lesion.

Although the amount of stromal inflammation present with microbial disease is enough to create this antagonism between the stroma and epithelium, the amount of stromal inflammation created by most other purely inflammatory processes of the anterior stroma (eg, viral stromal keratitis, hypersensitivity reactions) is generally insufficient to create this situation. In those cases, therefore, the epithelium remains either totally intact or only partially broken down over the lesion.

The microbial exceptions to this rule are that, as stated above, early stage Acanthamoeba generally presents without significant stromal infiltration, and fungal keratitis, which requires an epithelial break to establish, may produce an indolent enough ulcer that the epithelium may heal over the top of the infiltrate.

Microbial disease is more common in the central to midperipheral zones of the cornea, whereas hypersensitivity reactions are more common in the peripheral and limbal zones of the cornea. Stepping back to understand corneal immunology allows you to understand why this is generally the case. The central and paracentral corneal tissue is immune-privileged. As such, one of its features is a lack of both the afferent (lymphatic) and efferent (vascular) arms of the immune system. This creates a tissue that is unlikely to produce hypersensitivity reactions and subsequent inappropriate scarring. Conversely, however, by keeping the immune system at arm’s length, so to speak, it is unable to effectively deal with infectious processes early in their genesis, allowing them to get enough of a foothold to create pathology.

On the other hand, the limbal and peripheral corneal tissues are not immune-privileged, and so we see a much higher rate of hypersensitivity reactions and a lower rate of truly infectious processes. Because of this, most peripheral corneal infiltrates are appropriately treated with a steroid-antibiotic combination. Conversely, central isolated infiltrates that are larger than a pinhead and ulcerated must create a high index of suspicion that you are dealing with an infectious process, which can be made dramatically worse when treated with an inappropriate steroid; therefore, these should not be treated with combination drops initially.

Once the diagnosis of a microbial ulcer is made, initial treatment decisions must also be made. Although culturing microbial ulcers is the cornea clinic standard of care for any central or paracentral ulcer and is what I do at my clinic, it is far from community practice in both general optometric and ophthalmologic clinics. (Frankly, a full discussion of culturing practice falls outside the scope of this article.)

That being said, ulcers that are large, threaten or involve the visual axis, have unusual features suggesting a fungal pathogen, or that have a historic risk factor for being caused by a fungal ulcer should be cultured or referred for culturing on presentation. Ulcers with these features have a higher rate of going on to a surgical outcome, and thus they require careful navigation that includes culturing or referral to a clinic that does culturing. The reality is, however, that, except in eye facilities that perform their own gram stain interpretations, culture results take between 24 hours and 1 month to be definitively read. In other words, the benefit of culture results comes after initial therapy has already been initiated empirically.

LEARN AS YOU GO

Initial empiric therapy should always have the goal of being broad-spectrum enough to take care of a variety of pathogens. The reason for initiating broad-spectrum therapy is apparent: We want therapy to be effective. There is, however, a second less obvious reason to carefully select a broad-spectrum approach to initial therapy. If your initial treatment fails—and it will fail on occasion—you need to learn from that failure as much information about the identity of the causative pathogen as possible.

For example, if you begin therapy with a dated antibiotic such as ciprofloxacin as monotherapy, and the treatment fails, what has that failure told you? Most likely that you are not dealing with a gram-negative species, which would generally respond to an early generation fluoroquinolone. But you can’t eliminate the possibility of any gram-positive specie (Figure), which would respond poorly to an early generation fluoroquinolone regardless of whether they are methicillin-resistant Staphylococcus aureus or methicillin-resistant Staphylococcus epidermidis or not, or fungal pathogens. On the other hand, if you start and fail with carefully selected dual therapy, whether or not you use fortified or commercially available products, you can eliminate nearly all bacterial pathogens and be left with fungal pathogens as the likely source. 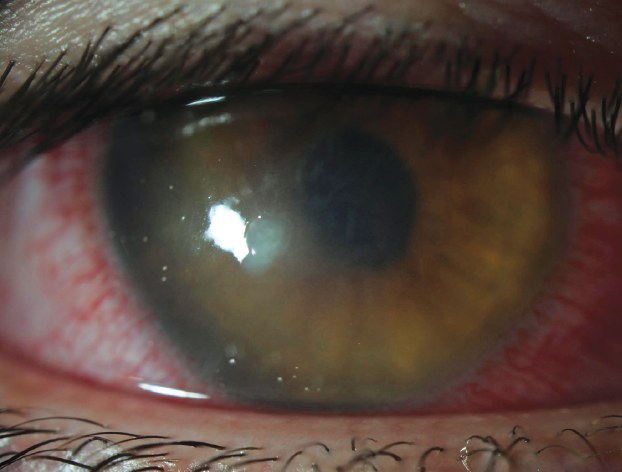 Figure. This small, nondescript contact lens–related ulcer was actually caused by a surprising pathogen. Due to the eye’s worsening despite initial broad spectrum therapy, we were alert to the possibility that we may have been dealing with an atypical microbe, so were not surprised when gram staining showed fungal elements and Fusarium grew on Sabouraud agar. The ulcer resolved with topical natamycin without any lost visual acuity.
Photo courtesy of Aaron Bronner, OD.

Navigating the differential with initial treatment failures as efficiently as possible is crucial to a successful success. We know that patients who fail initial therapy have a doubled overall rate of a surgical outcome, and this is likely doubled again with secondary treatment failure.5

Microbial corneal ulcers are challenging clinical entities to manage. Even with totally appropriate management, they may progress to a surgical conclusion. That said, these poor outcomes can be minimized by making a timely diagnosis and managing it thoughtfully. These diagnostic and therapeutic decisions should be made based on the history and appearance of the ulcer. Furthermore, close scrutiny of the results of therapy is necessary, as is an aggressive response if and when that therapy fails.

Next In This issue
Next: Tales of Corneal Clarity