Considering the vasculature in disease management.

One of the greatest benefits of OCT angiography (OCTA) is that it allows users to observe, measure, and monitor capillaries located in the retina and surrounding the optic nerve. Images can be obtained without the injection of dyes into the body, thereby eliminating risk of morbidity or mortality. OCTA also requires less time than a dye-based procedure. These instruments perform approximately 70,000 A-scans per second, which allows them to visualize individual layers of the retinal vasculature. The first device to use this technology received FDA clearance in September 2015, and devices are now commercially available from Optovue, Carl Zeiss Meditec, and Heidelberg Engineering. I am most familiar with the Angiovue imaging system (Optovue).

This article examines how OCTA can assist clinicians in the diagnosis and management of glaucoma.

THE ROLE OF THE VASCULATURE IN GLAUCOMA

Retinal nerve fiber layer (RNFL) and ganglion cell complex (GCC) loss in glaucoma is well recognized. The RNFL is measured in a circle around the optic nerve, and the GCC is measured in the macular region. The relationship between structure (RNFL and GCC) and function (visual field) in glaucoma is a subject of extensive study, but the role of the vasculature (optic nerve and retinal vessel density) is poorly understood.

Researchers are currently trying to determine whether the vessel density of the radial peripapillary capillaries (RPCs) and retina is compromised before the RNFL and GCC in glaucoma. OCTA can measure the RPCs around the optic nerve and the superficial and deep retinal capillaries in the macula. The technology shows early changes in retinal and optic disc vessel density.1

THE TECHNOLOGY IN PRACTICE

In the clinic, having the ability to compare structural and vascular status with OCTA gives me confidence when I am deciding whether to observe a patient or to commence glaucoma treatment. It also enhances my ability to detect glaucomatous progression. 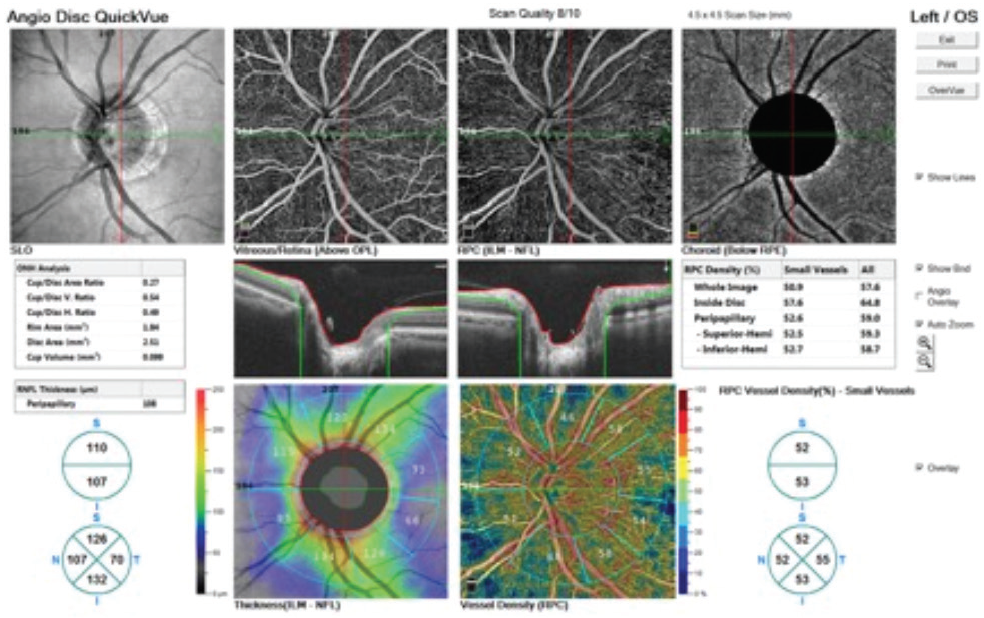 Figure 1. A normal OCTA report of optic nerve RPCs in a healthy 60-year-old man without glaucoma. 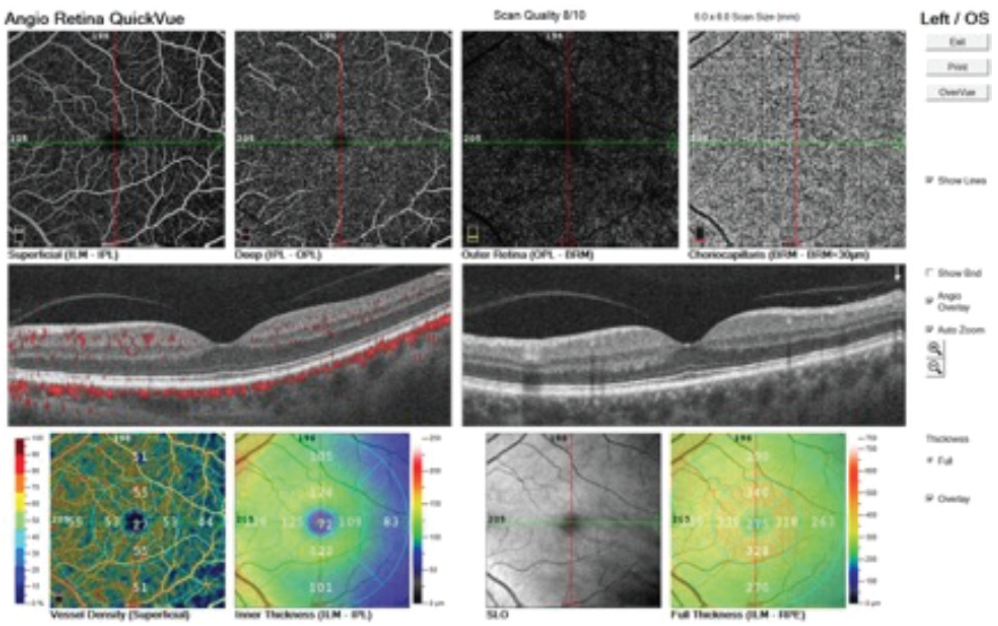 Figure 2. Normal layers of retinal vasculature and structure are seen in this image. Vessel density and inner retinal thickness are symmetric and intact.

Most OCTA instruments can create a montage of optic nerve and retina scans. Figure 3 displays montages for the right and left eyes of this patient. The RPCs and retinal capillaries are intact. 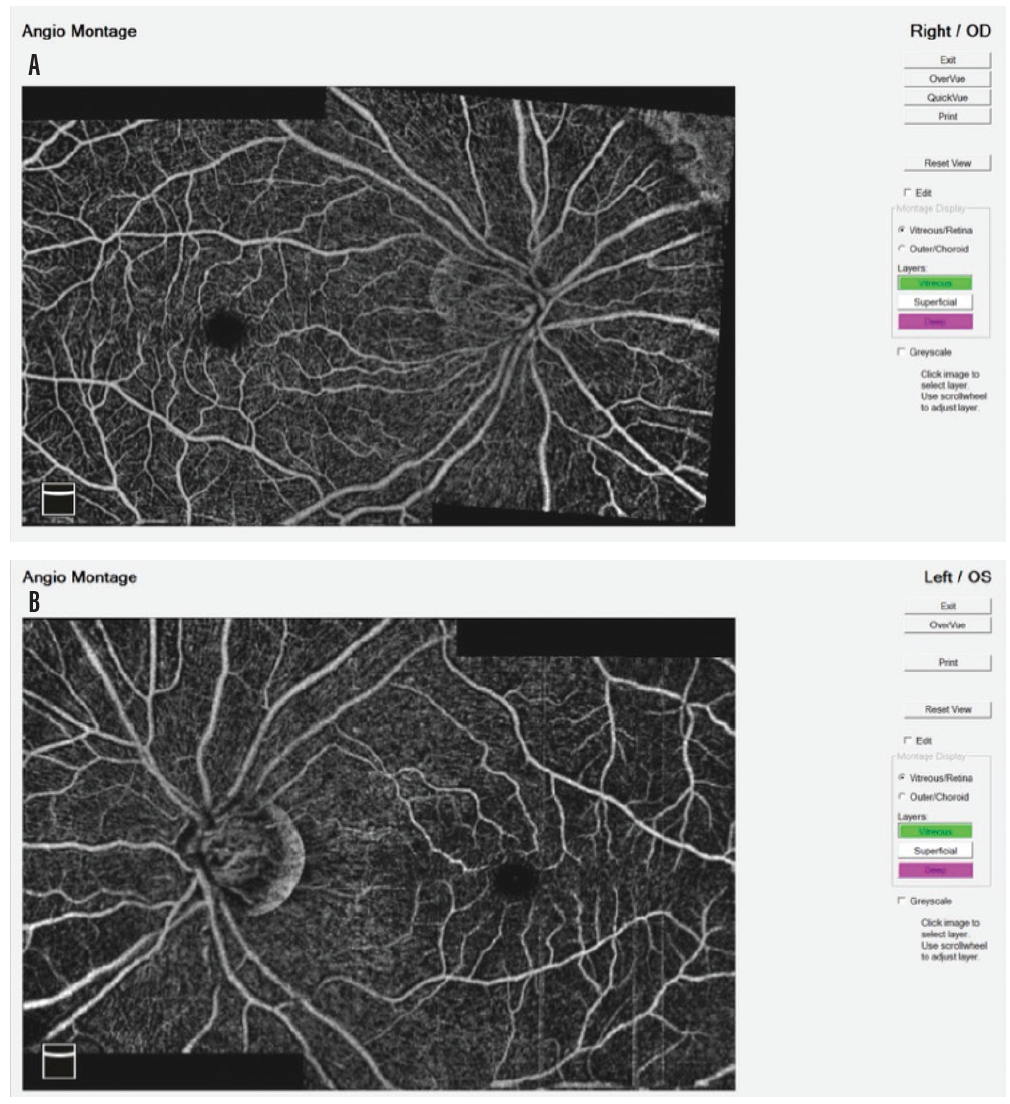 Figure 3. Montages for the right (A) and left (B) eyes of the patient in Figures 1 and 2. Note the intact RPCs and retinal capillaries.

A 68-year-old woman with primary open-angle glaucoma requested a second opinion on her management. At the time of presentation, the patient had been treated for glaucoma for more than 10 years. Her therapeutic regimen included dorzolamide 2% twice daily in each eye (OU) and bimatoprost ophthalmic solution 0.01% (Lumigan, Allergan) once daily OU. She had undergone cataract surgery and IOL implantation combined with placement of an iStent Trabecular Micro-Bypass Stent (Glaukos) in her left eye (OS) in 2017.

Upon examination, IOP was 22 mm Hg in the patient’s right eye (OD) and 16 mm Hg OS using Goldmann applanation tonometry. Pachymetry measured 569 µm OD and 575 µm OS. OCT imaging showed thinning of the RNFL in the inferior and temporal quadrants OD and in the inferior and superior quadrants OS, worse inferiorly. The GCC was compromised inferiorly in each eye (Figure 4). Visual field testing demonstrated functional loss OU that was worse OS, and both eyes had demonstrable visual field loss in the macular region (Figure 5). 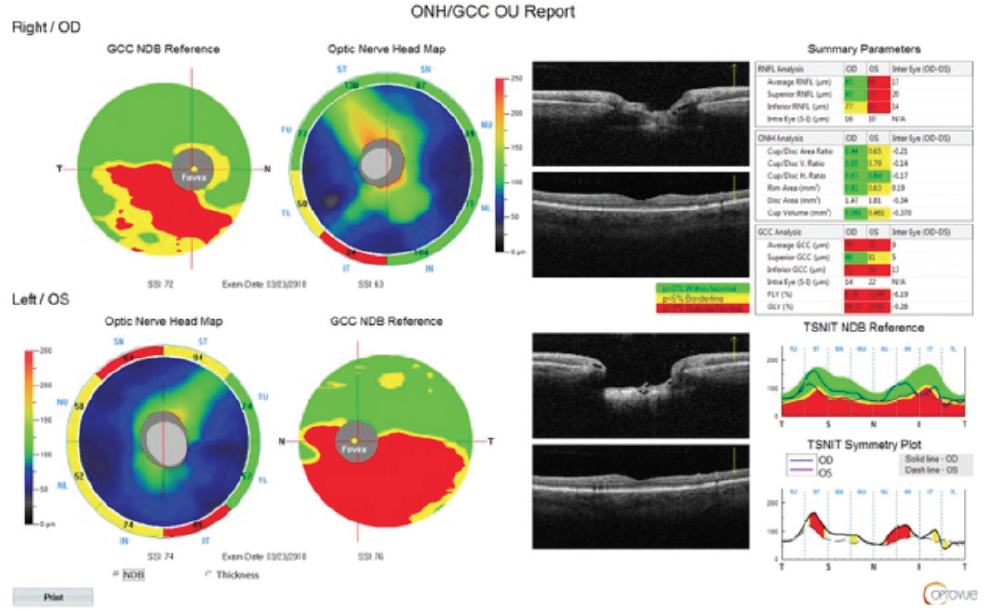 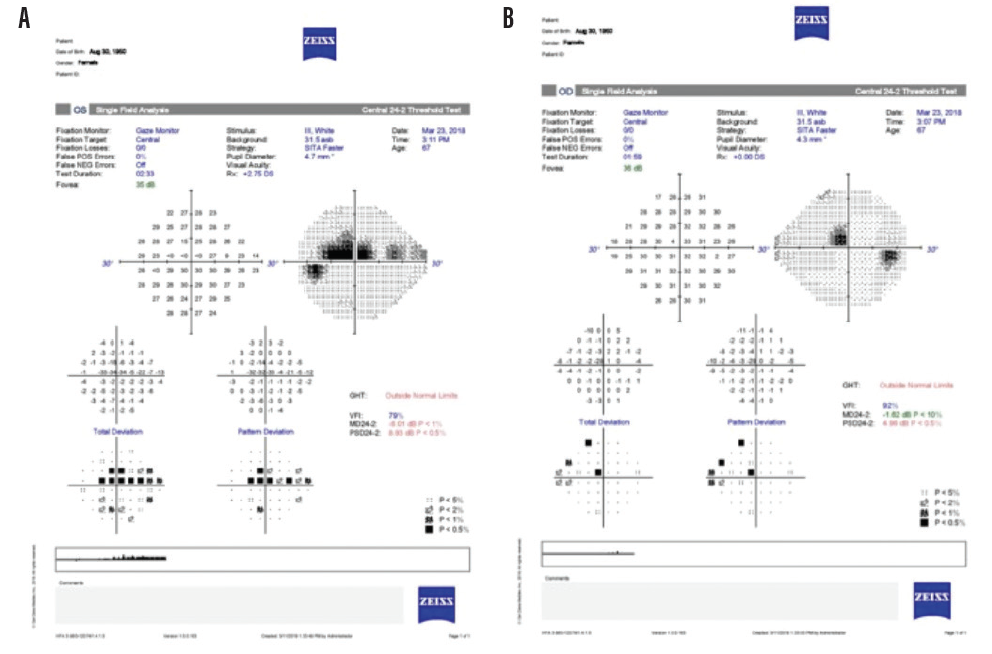 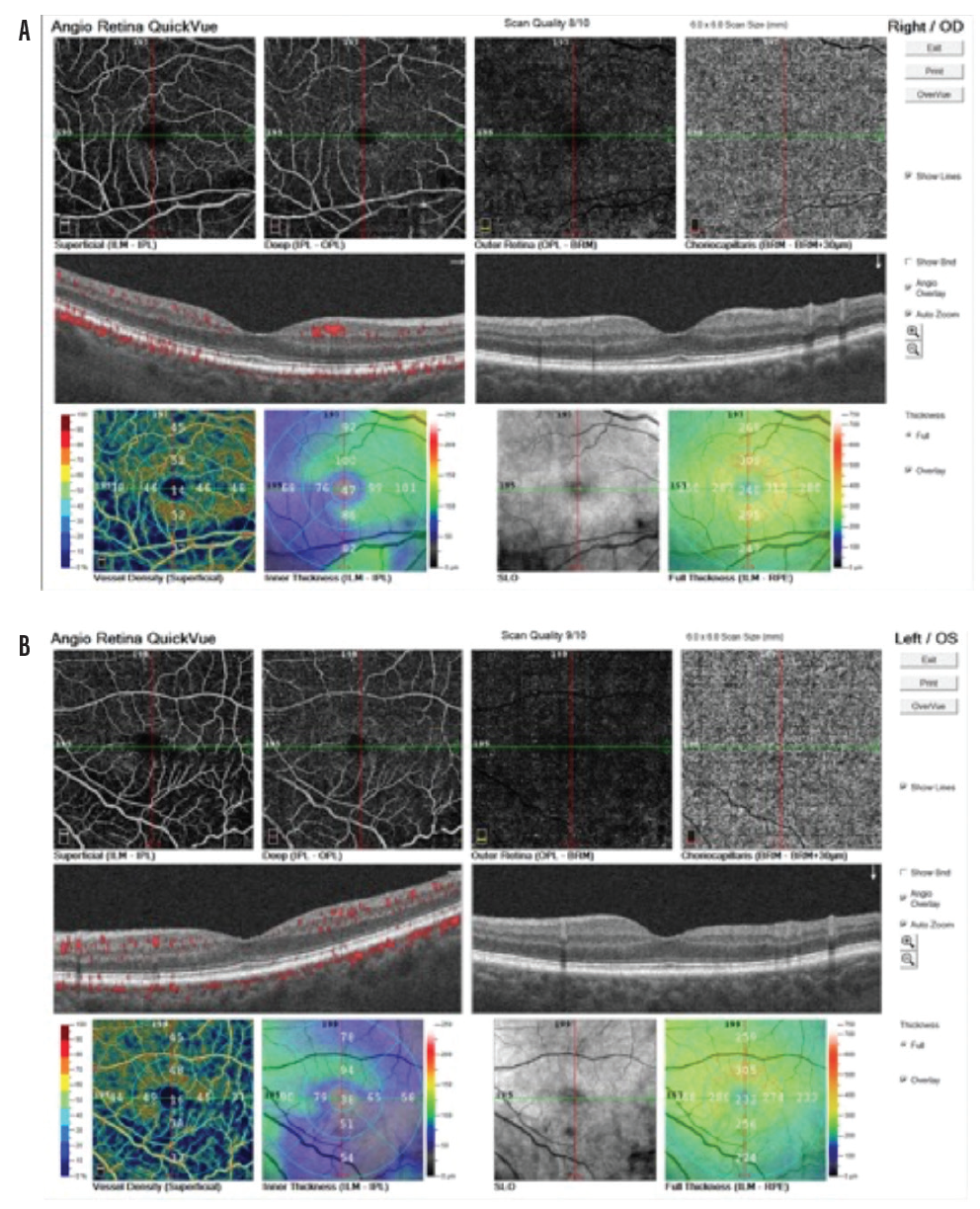 The wedge defect was seen to continue and widen on both the retinal thickness and vessel density maps. The defect could also be appreciated in the macula on the visual field tests. Montages for the eyes showed compromised capillaries, worse OS (Figure 8).

Figure 8. Montages show the compromised capillaries in each eye, worse OS (B).

My clinical impression was that the patient’s glaucoma was not well controlled OD. Because she needed cataract surgery, she underwent that procedure combined with glaucoma surgery using a Kahook Dual Blade (New World Medical). Postoperative IOP on medication was 11 mm Hg OD and 15 mm Hg OS.

Time will tell if these treated IOPs are low enough to stop or slow the progression of glaucoma. OCTA of the optic nerve and retina with vessel density measurements is another option for monitoring the patient’s status.

The ability of OCTA to measure loss of vessel density can help clinicians detect glaucoma earlier by providing an additional marker of disease damage. I find this information particularly helpful with patients who perform poorly on visual field tests and those who have RNFL artifacts on OCT analysis. Measurements of vessel density can also help one to gauge a patient’s risk of disease progression. I order OCTA scans of all my patients with glaucoma and glaucoma suspects. Much remains to be learned about this technology and its applications, but I am hopeful that it will increase clinicians’ understanding of this complex disease, and this will ultimately benefit patients. 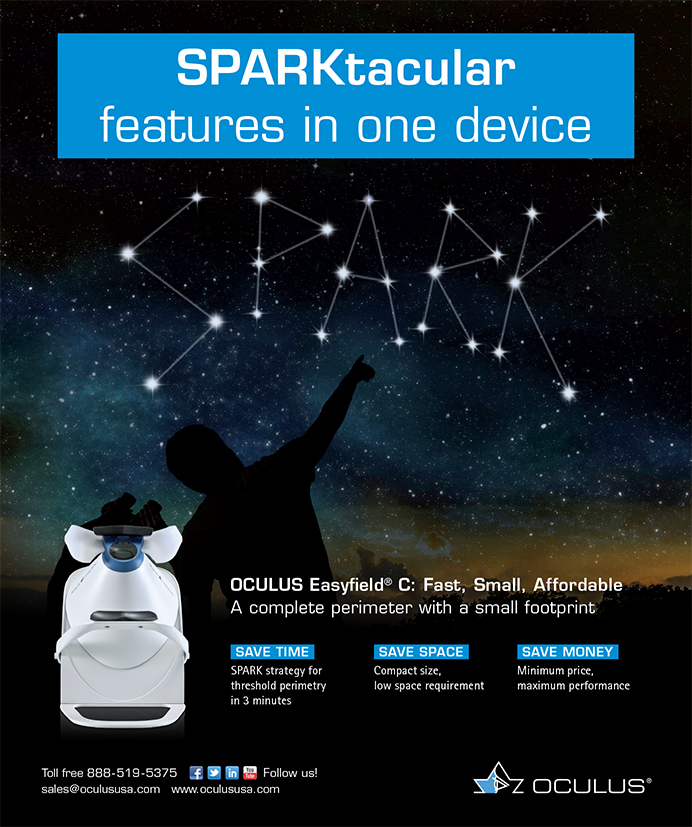 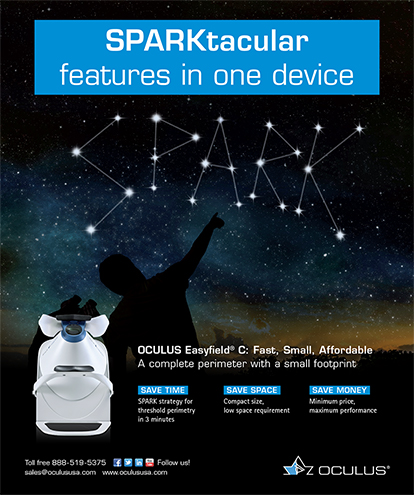 Next In This issue
Next: What ODs Need to Know About SLT