An overview of three noteworthy technologies.

The field of glaucoma is changing rapidly, thanks in part to advances in diagnostic technology. In this article we discuss three emerging technologies that are particularly promising for improving the management of glaucoma.

Several studies published little more than a decade ago originally reported an association between corneal hysteresis (CH) and glaucomatous progression.1,2 More recently, additional research has substantiated this connection, and experts are considering low CH as a significant risk factor for developing glaucoma. CH refers to the viscoelastic ability of the cornea to dissipate energy. In simple biomechanical terms, the better a cornea is at absorbing shock (ie, higher hysteresis), the lower the patient’s risk of developing glaucoma. It is hypothesized that CH may correlate with the hysteresis of the tissues around the lamina cribrosa, which would suggest an ability to withstand deformation and stress from IOP fluctuations.

The Ocular Response Analyzer (ORA, Reichert) emits a puff of air, causing indentation of the cornea. The device takes two measurements, one when the cornea is flat upon indentation and another when the cornea is flat as it returns to its normal shape. The difference in applanation pressure between these two points is the CH. The ORA also provides Goldmann-correlated IOP and cornea-compensated IOP (IOPcc). Compared to Goldmann applanation tonometry, the IOPcc is less influenced by cornea-induced artifacts, more accurately predicts rates of visual field loss, and may be a more accurate measurement of true IOP.3

In practice, the average CH value is around 10 mm Hg, with lower readings indicating an increased risk of developing glaucoma, and it has been shown to have a higher predictive value for glaucoma than low central corneal thickness. Low CH has also been found to be predictive of the development of glaucoma, the rate of disease progression, and a favorable response to selective laser trabeculoplasty.4-6 The CH readings of a patient’s two eyes may differ, as has been shown in patients with asymmetric glaucoma, in whom the eye with the lower CH value is likely to experience faster disease progression.7

The ORA is FDA-approved, and the reimbursement Current Procedural Terminology code for the measurement of CH is 92145. As with Goldmann applanation tonometry, the measurement of IOPcc and Goldmann-correlated IOP may not be billed separately from an office visit. Unfortunately, reimbursement for CH is lacking in some parts of the United States, so it is advisable to have patients complete an Advance Beneficiary Notice in case of noncoverage. Considering the significant amount of research supporting a connection between CH and glaucoma, it is likely only a matter of time until this measurement becomes a standard part of the glaucoma evaluation.

The Icare Home (Icare USA) tonometer is designed to allow patients to measure their IOP at home. A significant advantage of this technology is that it uses rebound tonometry and thus does not require the administration of a topical anesthetic. The user rests the instrument against his or her forehead and aligns the device in front of the cornea with the help of a light ring that surrounds the probe. When the Icare Home has been properly positioned, the ring turns green, and the user presses a button to start the measurement. The device records six consecutive measurements, and the average, the date, and the time are wirelessly saved to a cloud database.

The purpose of at-home tonometry is to measure diurnal fluctuations in IOP with greater accuracy, providing information that may explain disease progression or guide treatment. Considering that glaucoma treatment is currently based on a few seconds of in-office measurement per year, at-home tonometry could significantly alter how a patient’s glaucoma is managed. The technology can promptly catch pressure spikes in patients with pigmentary or pseudoexfoliative glaucoma, and drastic IOP changes in pediatric or postoperative patients can be addressed in a timely manner.

Limitations remain, including an inability to measure nocturnal IOP. Another is that approximately 10% of patients are not able to operate the Icare Home properly.8 Regarding accuracy, roughly 9% of readings vary by >3 mm Hg from Goldmann tonometry and 2% of readings vary by >5 mm Hg.9 This disparity was greater when central corneal thickness was <500 µm or >600 µm.10

The most significant hurdle that practices face with this technology is implementation. The Icare Home does not have a Current Procedural Terminology code for professional services for short-term use. Until this year, practices had to purchase the device, have patients sign an Advance Beneficiary Notice, and ask them to pay a rental fee to take the unit home for the designated time. New this year is the option of billing for “Remote Patient Monitoring” through Medicare, Medicaid, and UnitedHealthcare. This option allows billing for long-term services (≥ 16 days) and provides a single-use code for training patients to use the device. This development could allow more widespread adoption of the technology by physicians, possibly improving visual outcomes and reducing health care costs in a way similar to telemedicine.

The Triggerfish (Sensimed) is a contact lens sensor that is placed on the eye. The device does not measure IOP directly, but rather uses strain gauges embedded in the silicone lens to measure changes in corneal shape, which are thought to be correlated to changes in IOP, as it rises and falls throughout the day. The Triggerfish takes 300 readings every 5 minutes throughout a 24-hour period; each reading is measured in millivolts relative to an initial reading, which is set as zero.11

An ability to obtain IOP readings over a full 24-hour interval could provide valuable insights, especially for patients whose glaucoma is progressing despite reasonable IOP readings in the office. In addition, 24-hour IOP monitoring could confirm or refute findings and theories regarding IOP variations throughout daily activities and during sleep.

Unfortunately, the current version of the device requires the patient to wear a ring around the eye that connects to a data-collecting box, which could be bulky and cumbersome. Moreover, although one study has shown the Triggerfish capable of generating reproducible data,12 other researchers have had difficulty validating Triggerfish data with standard IOP measurements.13 This raises concern about whether the data generated can be used for true IOP readings.13 Better consensus on the data being gathered and modification of the device to show better correlation to the gold standard of IOP measurement could make this product more useful for glaucoma management. 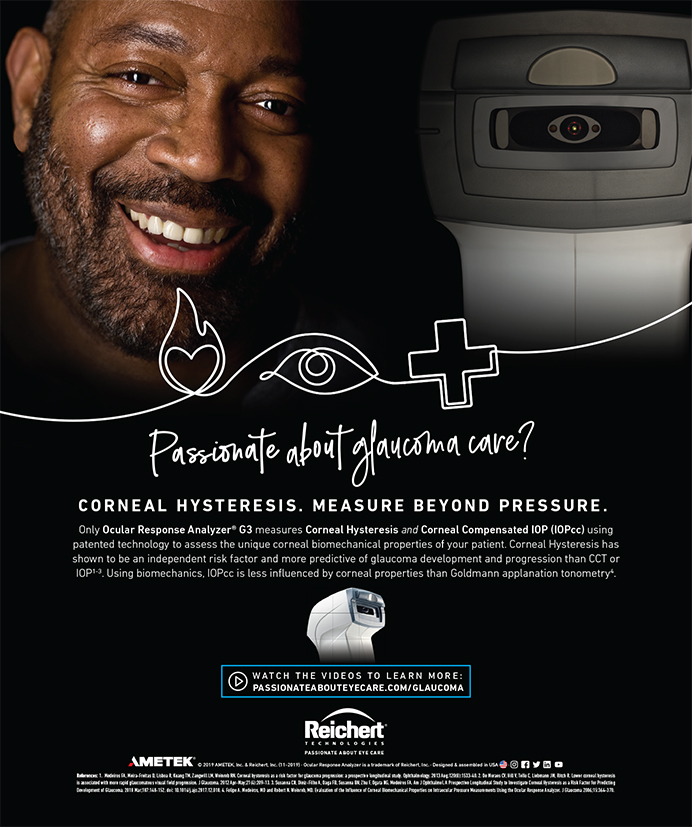 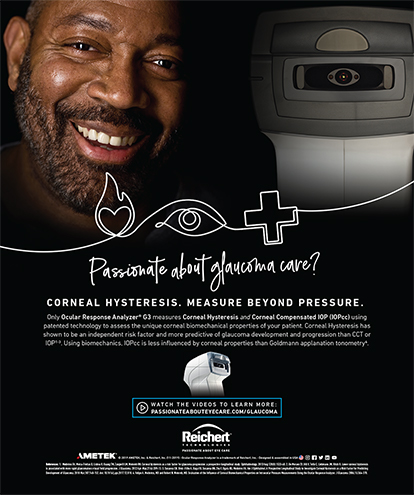 Next In This issue
Next: Virtual Reality: Coming to a Lane Near You