A New Dynamic in Health Care?

Have you ever had a patient tell you that he or she is afraid of developing age-related macular degeneration (AMD) based on his or her genetic profile obtained from a company offering direct-to-consumer (DTC) DNA testing? If it hasn’t happened yet, just wait—it will. We’ve both seen our fair share of patients, as young as 30, in this very scenario.

According to estimates, more people took DTC genetic ancestry tests in 2017 than in all previous years combined,1 and the trend is poised to continue. In fact, one in 25 American adults now has access to personal genetic data.1

What does this have to do with optometry? Well, for one thing, it caused us to question whether we are truly providing the level of service and care that modern patients desire. This article addresses that uncertainty.

For better or worse, patients now have direct access to a potentially confusing array of specific health details. For example, 23andMe, a popular genetic testing service, offers a growing list of DTC genetic health risk reports. Consumers can now order tests from this service, including BRCA1/BRCA2 (selected variants), AMD, celiac disease, hereditary hemochromatosis (HFErelated), late-onset Alzheimer disease, and Parkinson disease. In many cases, these tests can’t determine whether a person will progress or show symptoms of a disorder.

Although physical risks associated with taking these tests are virtually nonexistent, the associated emotional, social, and financial risks are a consideration. For example, according to the National Institutes of Health, people may feel angry, depressed, anxious, or guilty about their results, and the possibility of genetic discrimination in employment or insurance is also a concern.2 On the other hand, patients’ participation in their own care has been recommended as a way to improve patient safety.3

Being a doctor used to be pretty straightforward. Patients usually did as they were instructed, with the understanding that the doctor knew best. But, over time, physicians’ control began to diminish as patients’ hunger for access grew along with the world wide web. Today, our patients routinely google their diagnoses before they have even reached our checkout desk. This can spell trouble when they discover something that we neglected to mention. Indeed, the patient education portion of the exam arguably has become the most critical aspect of modern health care, and it can make or break your practice.

The trend of patients having access to detailed health information and getting involved in their own care is not aligned with contemporary health care practice. Because medicine is guided by evidence-based research, it rarely evolves in direct unison with Silicon Valley’s most popular innovations. Fortunately, you don’t need to be a venture capitalist to see that consumer trends are all headed in the same direction.

In our practices, we use our patients’ genetic testing results as opportunities to listen to and investigate their concerns. When patients come to us with these results, it opens the door to having a conversation about preventive measures, from lifestyle changes to nutraceutical supplementation to protective eye wear. Patients want to feel more in control of their care. They are starving for as much detail as they can get about their genetic background, not only so that they can connect with distant cousins, but also so that they can maintain their health and well-being.

The 23andMe genetic health risk report for AMD looks at the two most important genes known to be associated with increased risk of developing AMD: CFH and ARMS2.4 Patients who test positive for undesirable variants in these genes may first read up on the disease, then reach out to their eye care practitioner in a panic that they will go blind.

We need to be prepared for these patients. It is our job to listen to them and empathize with them, then take action by examining their retinas for the presence of drusen and performing dark adaptation functional testing. Impaired dark adaptation, as measured with a Goldmann-Weekers adaptometer (Haag-Streit) or with the AdaptDx (Maculogix) test, can help diagnose AMD in patients at least 3 years earlier than clinical examination alone.5 This early information is significant for patients with a confirmed genetic risk who are seeking answers.

Fortunately, if a patient does have early AMD, even subclinical, you can devise a treatment plan that may include more frequent monitoring and evidence-based recommendations to slow disease progression. Lifestyle changes such as smoking cessation, improved diet, increased physical activity, and systemic disease management can positively affect patients with all stages of AMD.6 Likewise, nutritional supplementation and retinal light protection play key roles in preserving vision.

ALL HANDS ON DECK

For hereditary diseases such as AMD, increased patient awareness combined with new diagnostic technology should lead to earlier diagnoses and better outcomes. This is vital because a staggering 78% of patients are first diagnosed with AMD after having already experienced irreversible vision loss, and nearly half of these individuals are first diagnosed when their acuity has already declined to 20/200 or worse.7,8 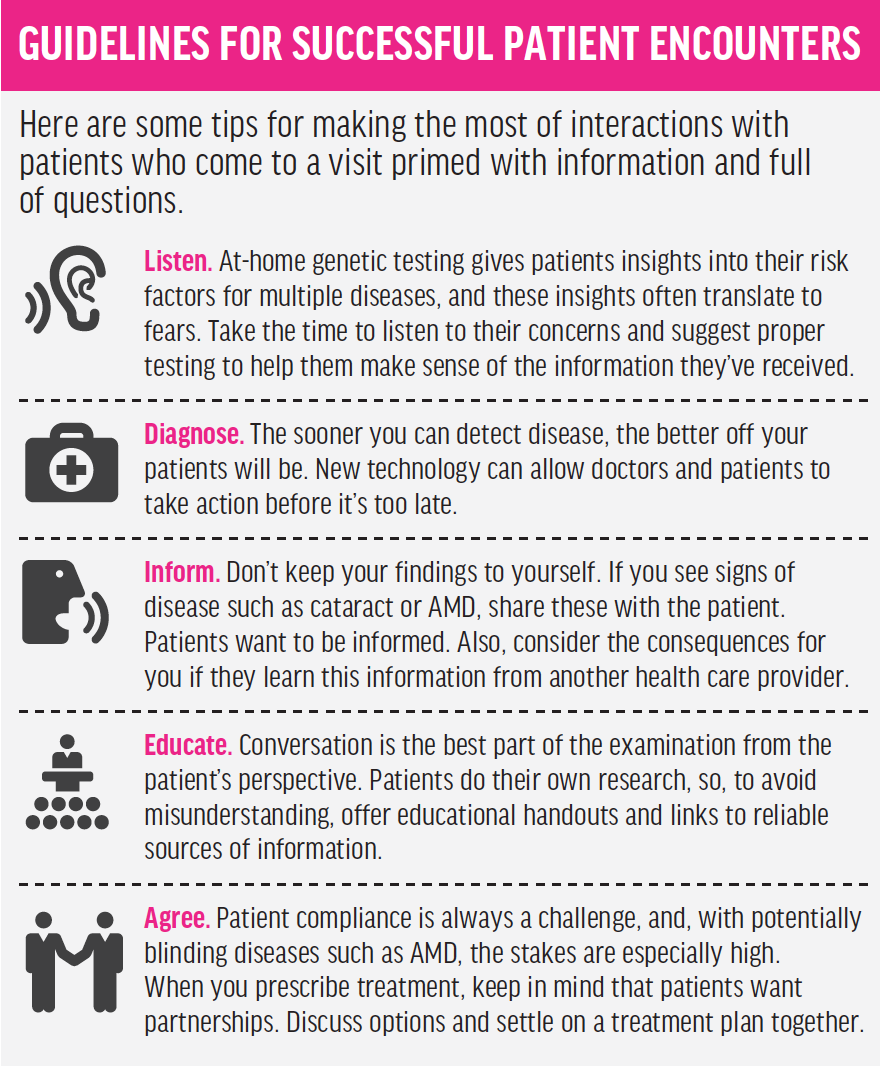 Historically, the prevailing model of health care was paternalistic, and the patient was a passive spectator in his or her own healing process.3,9 In today’s definition of health care, the patient is a key player (see Guidelines for Successful Patient Encounters).3,9 As leaders in health care, optometrists have an opportunity to model these new standards in particularly powerful ways, potentially leading to measureable improvements both in practice performance and patient outcomes.

Next In This issue
Next: Point-of-Care Testing Can Unlock the Door to the Right Treatment for Dry Eyes