Laser Therapy Then and Now

In the changing landscape of treatment options for diabetic eye disease, is there still a place for laser?

For decades, laser therapy was the only effective treatment for sight-threatening diabetic eye disease, both proliferative diabetic retinopathy (PDR) and diabetic macular edema (DME). The first report to confirm the beneficial effect of laser treatment was published in 1976 by the Diabetic Retinopathy Study Research Group. In that study, patients with PDR undergoing argon laser panretinal photocoagulation (PRP) had a 6.4% chance of severe vision loss, whereas those not receiving laser therapy had a 16.3% chance.1

In the 1980s, the Early Treatment Diabetic Retinopathy Study (ETDRS) confirmed the benefits of macular laser photocoagulation for the management of DME. Patients in the study who received macular laser therapy had approximately 50% less risk of moderate vision loss than those who did not receive laser treatment.2 Although laser therapy was effective at reducing progressive loss, many patients did not experience significant improvement in vision. In fact, only 3% of eyes undergoing laser treatment gained 3 or more lines of vision.2 It is therefore common practice to counsel patients with DME that the goal of laser intervention is to stabilize vision and reduce the likelihood of further loss, not necessarily to substantially improve visual function. For these patients, grid and focal laser therapy seals leaking capillaries and aneurysms, decreasing the accumulation of fluid and exudates in the retina (Figure 1). 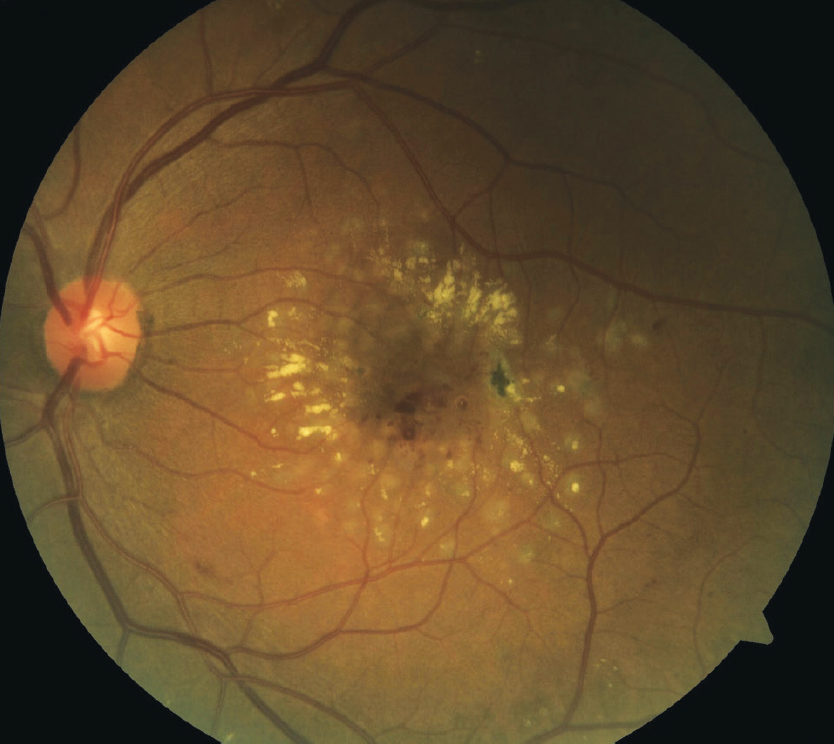 Figure 1. Focal/grid laser therapy in an eye with DME.

In the ETDRS, 40% of eyes with vision worse than 20/40 before laser therapy gained 1 or more lines of VA after laser therapy.2 So, although few patients gained 3 or more lines of VA, many of those with poor acuity at entry gained at least 1 line. Some have speculated that this observed dichotomy was due to the fact that 85% of the laser-treated patients had baseline VA of 20/40 or better, leaving only 15% of patients with vision poor enough to show major improvement.3

Although it can be beneficial, laser treatment comes with potential side effects. PRP can lead to constriction of the peripheral visual field, decreased night vision, and decreased contrast sensitivity.4 PRP also has the ability to worsen macular edema, thereby temporarily or permanently decreasing vision.5 Some patients find PRP painful, and it can contribute to the formation of epiretinal membranes. Central focal/grid argon laser therapy can leave small scotomas, perceived by patients as spots. These scotomas can become enlarged over time due to a phenomenon known as laser creep, in which the laser lesions expand with time.6 Vision can also be adversely affected if treatment is inadvertently applied to the papillomacular bundle.

Although laser therapy was the mainstay of diabetic retinopathy treatment for years, new paradigms have emerged. Anti-VEGF injections now play a prominent role in the management of DME and, to a lesser extent, of PDR.

Multiple studies have shown anti-VEGF injections to be superior to laser therapy in decreasing DME and improving vision.3,7-9 The BOLT study compared bevacizumab (Avastin, Genentech) injections with laser therapy in the management of patients with persistent DME, all of whom had previously been treated with laser. The bevacizumab group gained 8 letters of VA on average, while the repeat laser group lost 0.5 letters.3 There was a gain of 10 or more letters of VA in 31% of the bevacizumab group but in only 7.9% of the patients treated with laser. The bevacizumab group had an average decrease of 130 µm in central macular thickness, while the average decrease in the laser-treated group was 68 µm.

The REVEAL study compared ranibizumab (Lucentis, Genentech) injections alone, ranibizumab injections plus laser treatment, and laser alone in a population of Asian patients with DME.9 The results showed robust advantages at 12 months in ranibizumab-treated eyes compared with laser-only eyes in both amount of VA gained and decrease in central macular thickness.

Results such as these prompt the question, if anti-VEGF injections are superior to laser therapy in the treatment of DME, why is laser still a part of modern management of diabetic eye disease? An explanation can be found in the REVEAL study results.

WHEN LASER THERAPY IS THE BEST CHOICE

In the REVEAL study, patients treated with ranibizumab alone received an average of 7.8 injections in the first 12 months, whereas those treated with laser alone received an average of 1.9 treatments.9 This difference in treatment burden is also routinely encountered in real-world clinical practice. Simply put, although anti-VEGF therapy is more effective than laser in the management of DME, it requires more office visits and treatment sessions. Therefore, laser therapy still has a role to play.

Traditional laser intervention may be beneficial for patients who have difficulty traveling, those who are poorly adherent with follow-up, or those who do not respond well to anti-VEGF therapy. Laser therapy is also often appropriate when DME is present but does not involve the central fovea. When macular edema is not center-involving, vision is often normal. For patients with this type of disease, improving vision isn’t necessarily a priority, and the advantage of laser therapy requiring fewer treatment sessions often sways the decision process toward laser. The number of visits also affects treatment cost, making laser therapy a more cost-effective option when compared with anti-VEGF therapy, especially when the injectable anti-VEGF medication itself is expensive.

In the case of PDR management, laser therapy in the form of PRP remains a major component of intervention (Figure 2). Scatter laser photocoagulation is used to damage a portion of the peripheral retinal tissue, thus decreasing the overall oxygen demand of the retina and resulting in decreased production of VEGF. In the treatment of PDR, anti-VEGF injections are often used to augment laser therapy rather than replace it. Treatment frequently consists of a combination of laser and anti-VEGF medication, depending upon clinical considerations such as the presence or absence of vitreous hemorrhage. 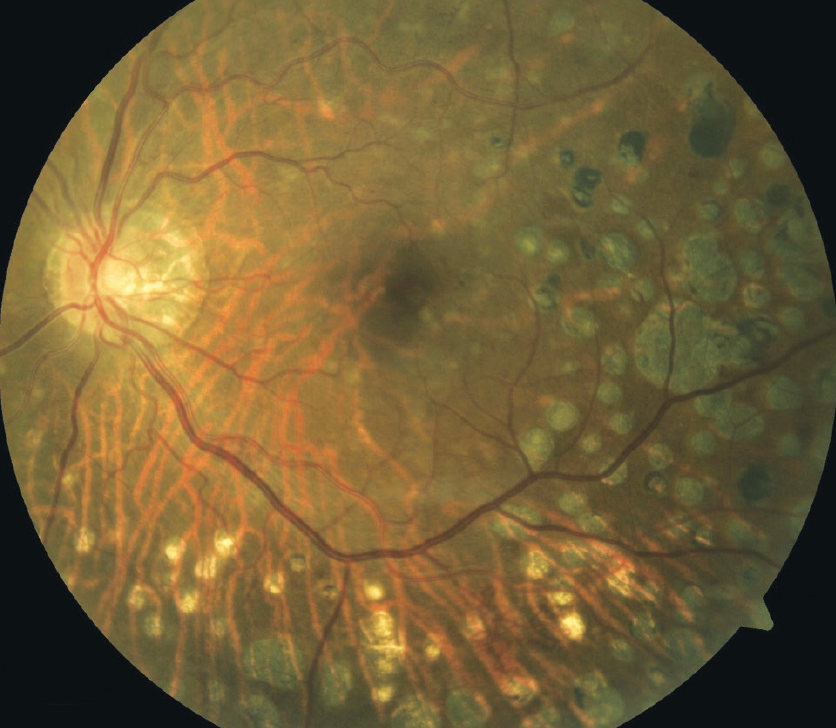 A NEED FOR LASER REMAINS

The care of patients with diabetic eye disease, particularly DME, has undergone significant evolution in recent years.6 Whereas at one time laser treatment was the only option for the management of diabetic retinopathy, now anti-VEGF injections have become the primary treatment for DME. Laser treatment, however, still has a place in the management of patients with diabetic eye disease, often combined with anti-VEGF drugs and/or intravitreal steroids, when clinically appropriate. 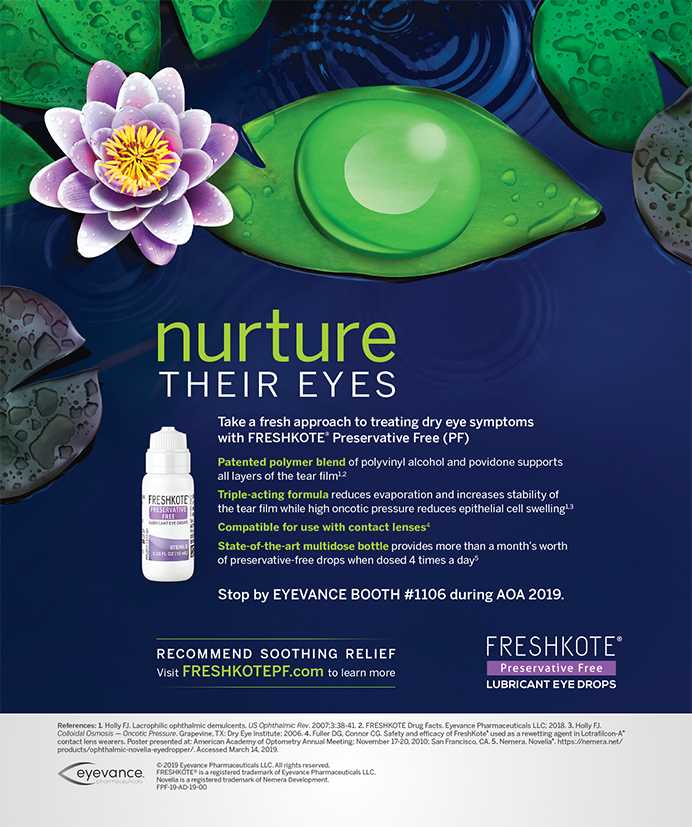 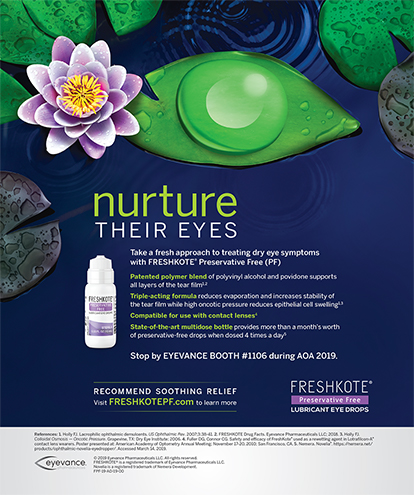 Next In This issue
Next: What’s Your Game Plan?